Last week we had the opportunity to organize a special event for the important insurer Vida Caixa.

Located in an old manor house that dates from the 17th century, the Mas Bon Vilar, from the Double Tree by Hilton Hotel & Conference Center La Mola, hosted the event that began in the conference room, where the Tecnorent team assembled a large LED display for the occasion and sound equipment with digital and encrypted QLX-D microphone, whose most outstanding feature was that it facilitates a hidden and discreet communication, when the occasion requires it.

After the presentation, the evening continued with an outdoor activity in which the attendees, led by the Michelin Star chef, Nandu Jubany, had to prepare by teams what would apparently be their dinner. 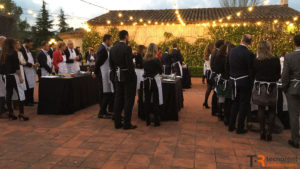 Luckily for them, dinner was properly served after the activity, and nothing had to do with what the diners made.

Tecnorent was in charge of giving a touch of festivity to the evening, decorating the exteriors with garlands that contributed the magic that the client wanted to transmit to his guests.

Dinner was served in a spacious dining room of the hotel, where elegance and avant-guard went hand in hand, thanks to the characteristics of the room, the lighting and tableware. Finally, to put the icing on the cake, the evening was accompanied by a party with the performance of a live musical group, where the band played popular pop rock themes of recent times.

8,000W of sound managed to provide the venue with the necessary acoustics to transform it into an authentic dance hall, where led bars and bulbs with moving heads brought multiple colors into the space. 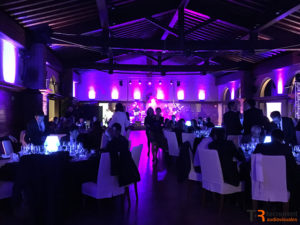 Our technicians were present throughout the event, to ensure that the different activities planned for the evening were developed perfectly, according to the planning and instructions of the client.

We know that the final result was a success for the Double Tree by Hilton Hotel & Conference Center La Mola, both for the active participation of the attendees and for the feedback we received from Vida Caixa. As usual, we were pleased to satisfy our customers and exceed their expectations with an excellent result as they deserve, because in Tecnorent we do what we like and we do it in the best way we know.